The Extravagance of God!! 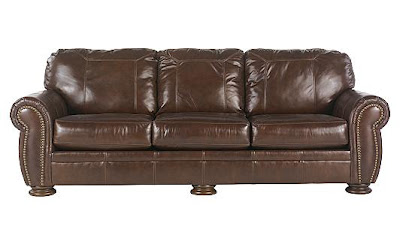 Meet our new couch!! Well this is actually not our couch, it is a picture of our couch. This couch represents months of waiting, agonizing and praying. Last Christmas we were given $$ to purchase a new couch by my parents and my aunt. We went shopping in January, but the choices were overwhelming so we couldn't make up our minds.

Plus, David and I aren't the best furniture shoppers on the planet. Once we bought a chair that was cheap, really cheap. When we got it home, we realized it was largest chair know to mankind ..although it sure is comfortable. The mammoth chair made our living room look like a fairy tale. This loveseat is too small. This chair is too big. This chair is just right.

Also, about the same time we started shopping for furniture, I began to work at Habitat for Hope and admittedly got a little distracted, well maybe a lot distracted. There was so much to learn and so many people to get to know!!

In addition, David and I also decided to freeze any extra spending. Why? Because this dream job is a support raising position (in case you don't know what that means, it means my paycheck comes from the generosity of others). If I had $20 for every time I've told someone that it is my responsibility to raise support and their response was "I could never do that" then my salary would probably be fully funded :-)

Honestly....It has been hard, really hard to raise support. And it's stressful.

Looking ahead to 2012, I'm thankful to have people who have committed to partner with Habitat for Hope and provide salary support. This support enables me to do my job to recruit, encourage and mobilize volunteers to serve families with critically ill children.

The difficult thing is the support I have raised is only a fraction of my salary. Imagine getting 10% of your paycheck....that's where I am right now. This week David and I have had some time to really pray through and talk through this reality. We have decided to continue to walk forward in faith, trusting the Lord to provide for our needs. We've decided to be thankful for the 10% and trust God to provide the 90%.

At this point you might be wondering what in the world this has to do with this gorgeous leather couch? I'm glad you asked. Tuesday I started in earnest shopping for a leather couch and went to several stores and picked out a few couches. On Wednesday I was on my way downtown to visit with a family from Uganda whose son was having brain surgery and I decided to stop by the Ashley Furniture Outlet (thanks Shelley for the recommendation).

A bright light shone upon one couch in particular (not really!!). This couch was very similar to a couch I had been looking at the day before which cost $700 in the Ashley showroom. I decided to ask a guy who was unloading the truck how much the couch cost. He comes over and starts looking at the couch and said $299. (I'm thinking yippee!!). Then, he looks a little closer at the couch and said, No, make that $199 and I fainted on the spot (not really).

I said...we'll take it and called David to get his hiney down to the warehouse immediately. It took him forever to get there because his truck kept overheating. (And now we're praying for God's provision for our truck)

There's more to the story...but here's the bottom line. I'm sitting here on this brand new, all leather, incredibly comfortable sofa that my whole family can sit on, overwhelmed by the extravagance of God. He cares about the details and as we move into 2012, I choose to rely on Him and trust His generosity and His provision!!
Posted by Diane at 5:49 AM