Something To Think About

I just returned home from a Saturday morning visit to Lowe's (as an aside, if anyone stumbling onto this blog has a sudden desire to give me a present, a Lowe's gift card will do nicely). Anyway, while there, I noticed a very loud car alarm going off right outside the front door.

If anyone else at all noticed, it would have been hard to tell.

Like everyone else, I went about my business. When I left I noticed that the alarm had stopped. Either the owner shut it off or the car got stolen. Who knows? I had plants to look at...fasteners to buy...

But...it caused me to think. How is it that we've gotten to this point...the point where an alarm goes off and no one seems to notice...or at least take visible action in many cases. Alarms are viewed as more of a nuisance than as an...alarm. I imagine that if it were 150, 100, or even 75 years ago, maybe even 50...the idea that something was wrong or a person's property were being damaged or stolen would probably have brought neighbors running...in some cases a whole town would come out...all ready to do what was necessary to help. Sort of like the old bucket brigades in fighting fires.

What if that were change? Every time you hear a car alarm going off, run like crazy to that spot ready to defend that owner's property. Challenge anyone nearby. Stay there until the owner shuts the alarm off. Call the police on your cell phone and report a theft or vandalism in progress ("come on, officer, an ALARM is going off...something MUST be wrong!!!").

Was It Only A Dream? 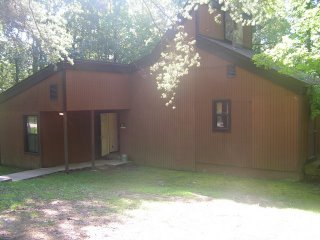 It seems like a dream at times, especially now that the school year is in gear full speed and the family calendar is getting packed with activities related to friends, church, school, etc. Just a few weeks ago our family spent a week relaxing in this cabin in the East Tennessee foothills in the Fall Creek Falls State Park. Our friends Terry and Renee Wright and their family had a similar cabin not too far away. We had a great time visiting with them and enjoyed the scenery and park activities! But again, given how fast things took off when we returned, it seems like only a dream...