A Walk in the Woods Beside a Lake - Part Two 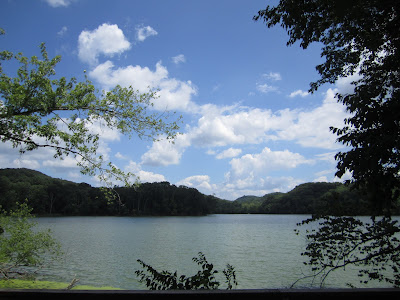 Part 1 of this story in case you haven't read it.

After changing my mind about which trail to walk, I realized I had to go back as far as I had come. It was getting hotter by the minute and I was getting more and more tired. As I was walking I began to have a mental whining session. "I'm tired". "I'm hot!!". "Who am I to think I can walk a half marathon?" "I can't do this!!" and so on and so on.

Then, I came upon a young girl stopped on the trail taking a picture of a deer. And I thought to myself "YEAH..a photo op. An excuse to stop and take a picture". So I pulled out my phone and started taking pictures. Which is really stupid because my phone takes terrible pictures and I don't even know how to get them onto the internet.

But still it was a chance to take a break. I spoke briefly with the young woman and she went on about her walk. And after a few moments I followed her, still fatigued and tired. Then, an idea came to me to ask her if she would be willing to share her pictures from her camera with me. I began to walk more quickly to catch up with her.

After getting her attention I explained that I am training to walk a half-marathon in the fall in Ohio to raise $$ for Habitat for Hope. Since this walk was a part of my training I wanted to write a blog about it and I asked her if she would be willing to send me a few of the pictures she took for my blog.

As I was giving her my email address....a crazy thing happened. We were chatting about the half-marathon and she told me she too is doing a half marathon with her sorority in Sept to raise $$ for Make a Wish. Turns out....

Turns out in the middle of a wildlife preserve in Nashville, TN, I just "happen" to run into a wonderful young lady who is walking in the same half-marathon as I am walking. What are the odds?

There is no way on God's green earth that was a coincidence. As I walked away from her the "whining session" turned into songs of praise. Praise for a God who cares so much for me that He would orchestrate a seemingly chance encounter to encourage me to PRESS ON, a chance encounter to remind me that NOTHING is impossible with God.

What's impossible in your life?
What's got you discouraged?
What are you whining about?

Remember PRESS into Christ and PRESS on. He's got it covered!!
Posted by Diane at 8:37 AM No comments:

A Walk in the Woods Beside a Lake!! 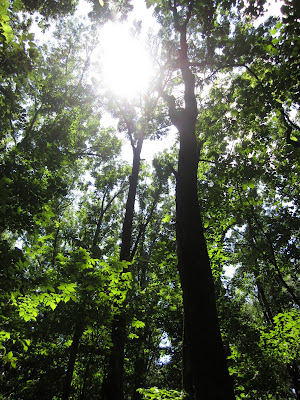 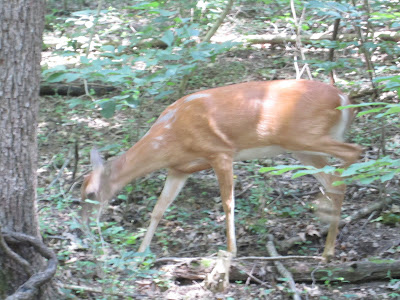 A walk alone in the woods beside a lake seemed like a good way to get in a decent walk and soak in the beauty of God's creation. I'm training to walk a half marathon and I have been trying to walk in different places to keep it interesting. Little did I know when I began to walk what would happen to me. Little did I know where my steps were leading me. After all it was just a walk in the woods in a suburb south of Nashville.

It was a beautiful afternoon and I chose to walk the 1.37 mile Lake trail that went down one side of the lake and planned to take the .89 mile trail on the other side of the lake. A simple walk really. After all I've been training for a half marathon and this should be easy, right? Along the way I saw some deer and was really amazed that they did not run away. Being a wildlife preserve, they felt perfectly safe. The lake view was gorgeous with the sun sparkling on the water.

I really was enjoying my walk, but it was seeming to take a little longer than I expected. Even now I am convinced that 1.37 in trail miles is way longer than 1.37 in my neighborhood. Finally, I came to the place where I should turn to go on the trail that would lead me back to my car. However, what I could see of the new trail was in the sun. Since I had never been there before I stood there and debated. Walk in the sun in the scorching afternoon heat or turn around and go back the way I had come under a canopy of trees.

And, I confess, I was feeling a little tired at this point. After a little debate with myself and some thinking, I decided to walk back the way I had come. It was a little longer therefore my walk would be a little longer. When you are training for a half marathon, that's always a good idea. The cool part of the story is what happened next...

I've been reflecting on the words in 1 Corinthians 13 that describe love. It has been a while since I have written a blog post about love. Maybe I have writers block. Or, maybe, just maybe I really do not want to write about or even think about the next three words.

Strut!! By the way that word looks funny when you type it.

Strut.
Swagger.
Show off
Walk in such a way to call attention to yourself.
To behave or perform in an ostentatious manner (I think ostentatious is a cool word. I remember learning it as a vocabulary word as a teen. In the 80's we did ostentatious well!!)

Living with teenagers I see them strut all the time. Sometimes I have to smile when I see my daughters strutting. Sometimes they are subtle. Sometimes not so subtle. They want to be noticed. And usually it involves a cute boy in the near vicinity. I, of course, never engaged in such activities when I was a teenager :-)

See, I get distracted when I think of the word strut.

To love more I must strut less.
When I think of the word strut, I think of walking.
Maybe it's not so much how I walk, but how I talk.
I think I'll be quiet now!!!
Posted by Diane at 7:14 AM No comments: