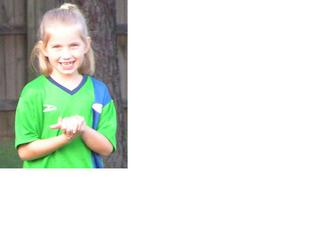 Some things happened yesterday that caused me to think about teamwork.

First, my daughter Clara (shown here) played in her next-to-last soccer game of the season. Clara's team has done very well this year. No losses, one tie, and most victories have been decisive. Clara hasn't scored that many goals at all, but she is a vital part of the team. The team doesn't focus on who's scored the most goals, but they do focus on the fact that the Green Dragons are undefeated! Clara plays all positions well, but loves playing defender. Yes, she plays the entire game with that big smile plastered on her face.

Second, my daughter Hannah had her assessment for a basketball league she's playing in this fall. I was sitting with a coach while the assessment was going on, and though she's never played basketball on a team before, he commented that she seemed to know quite a bit of the basics...offense, defense, when to pass, when to shoot. I think she will learn a lot about teamwork in this experience.

Finally, the team I love to follow, the University of Georgia Bulldog football team, won it's seventh game of the season (with no losses). However, our starting quarterback was hurt during the game and had to sit out most of it and it was obvious how his absence hurt the team. They did win, but not decisively against a team over which they were favored by 17.

I guess I'm being introspective, but it caused me to consider my own role as a part of THE Team. Do I get discouraged when I don't score as many goals? Do I value some members of the team more than others because they DO seem to be the ones to score all the goals? Do I minimize the contributions of less celebrated team members? Do I play my position, as Clara does, with everything I have even though I might not get noticed when others score. Does the opponent even notice when I'm sitting out? Maybe it's time for a pep talk from the coach...

Romans 12: 4 - 8. "For just as we have many members in one body and all the members do not have the same function, so we, who are many, are one body in Christ, and individually members one of another. Since we have gifts that differ according to the grace given to us, each of us is to exercise them accordingly: if prophecy, according to the proportion of his faith; if service, in his serving; or he who teaches, in his teaching; or he who exhorts, in his exhortation; he who gives, with liberality; he who leads, with diligence; he who shows mercy, with cheerfulness.

Ephesians 4: 11 - 12. "And He gave some as apostles, and some as prophets, and some as evangelists, and some as pastors and teachers, for the equipping of the saints for the work of service, to the building up of the body of Christ..."

friend - a person whom one knows, likes, and trusts; a person with whom one is allied in a struggle or cause; a comrade; an ally.

One of the most valuable pieces of advice my dad gave me early on, and continues to give me to this day, is "you can never have too many friends." Though some would dispute the idea, I've always found it to be true. Friends are like treasures. True, real, close friends are priceless.

I have been blessed through the years with many, many friends of varying degrees, from merely acquaintances to surface friends to friends to true, real, close friends. Some will likely show up as topics of conversation in Chateau Smith in coming weeks and months.

A regular fixture in the first Chateau Smith was a friend that has consistently remained close to this day regardless of our individual physical locations or life struggles. Terry Wright is the personification of Psalms 17:17. Regardless of how good or bad his life is or how good or bad my life is...Terry is there (and his wife, Renee, is a similar priceless friend to my wife, Diane). To this day we talk on the phone several times a week. We share our lives with each other, including triumphs and trials.

Terry is now the pastor of Dunn's Creek Baptist Church in Palatka, Florida. His church has several hundred attendees, yet he finds the time to keep our friendship growing. Terry is one of the first outside of our immediate family to know of most of the things that happen in our lives. He keeps up with my world, holds me accountable, encourages me, prays for me, celebrates with me, grieves with me. Even though we are separated by distance, I also view him as my pastor.

For any who have stumbled onto this blog, please take a moment to evaluate your friendships. I'd love to hear characteristics of YOUR close friends. What kind of friend are you to those God has placed in your path? Personally, I have a LONG way to go to be a good friend to those whose path I have crossed and hearing about the friendships of others helps me grow. It is great that I have such a real, living example of how to be a good friend.
Posted by Big D at 12:01 PM No comments: 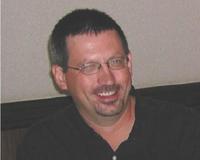 Chateau Smith is now open...again. As this is my entry into the blogging sub-culture, this is also my welcome message. Originally only a place to visit in person, Chateau Smith is now in cyber-space. I hope you will feel at home here as the many who did at the original Chateau Smith. There is still some work to do here on the cyber Chateau, but there always was at the original as well. That didn't stop the door from always being open then, and won't here either. Let the fireside chats begin...
Posted by Big D at 10:55 AM 1 comment: